Miles is one month and a day old.  To give you an idea of what life looks like with a newborn, I started working on this post over four days ago…. I win. He appears to be the same size as the day he was born, except for the three pounds he has gained in his cheeks. He’s too young to understand that his Daddy calling him “Jowly” may not be the most flattering nickname in some circles. We will have to cut that habit by the time he starts kindergarten.

One day when I was changing his diaper he  started peeing (as little boys tend to do).  Lucky for me the stream was in no way directed at me.  Unlucky for Miles the stream went directly onto his little face.  Also unlucky for Miles, his mom thought it was HILARIOUS and instead of thinking quickly and throwing a towel on him to stop the carnage I ended up in hysterics on the ground trying not to pee my pants.  Poor guy.

Things Miles is All About, 1 month edition.

Things Miles Thinks are for Suckers:

Fact: Non-gendered anything baby related is super hard to come by.  It seems like everything is either pink with flowers and or blue with trucks on it.  Sigh.  Until we find out what we’re having (and yes, duh, we’re finding out) I’ve mostly been perusing pages of adorable baby things without being able to get anything.

I mean, look at these.  I die.  The cuteness hurts.

While I’m recovering from Vegas, here is a picture of me when I was little.  We had to bring them in for a work team building thing.  I am pretty sure everyone will know this is me. 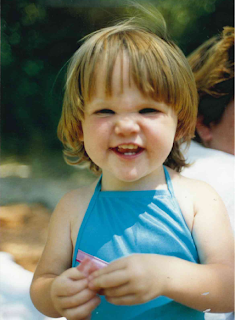